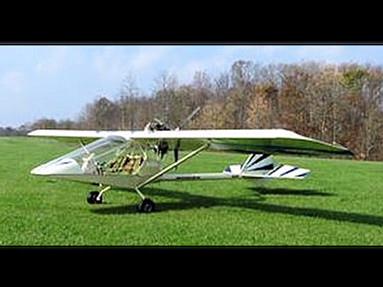 In 1990, after the FAA allowed for heavier 2-place ultralights, the same basic TwinStar Mark II design was strengthened (main spars increased from 5" to 6" diameter) to carry the more powerful Rotax 582 engine and also to increase the gross weight to 1000 lb. resulting in the TwinStar Mark III.

In 1993, the Mark III lite was introduced. The lite version was discontinued in 1994 as most people wanted the flaps which the Lite version did not have.

Cabin width is 42 inches and entrance is through one of the two gull wing style doors.

From the manufacturer Kolb Aircraft:

Our most popular aircraft, the Mark III Xtra embodies all of the design features and flying characteristics of our Mark III Classic. It is easy-to-build and easy to fly. With its gross weight of 1000 lbs. and slow stall speed, it qualifies as an experimental kit build light sport aircraft... Perfect for Sport Pilot!

HIGH PERFORMANCE
The Mark III Xtra is aerodynamically designed to offer increased speed. With the expertise of Barnaby Wainfan, enhancements were made to the fuselage section of the aircraft which generously offers an additional 10-15 mph cruise speed of 80 mph with the Rotax 582, and 90 mph with the Rotax 912.

STURDY CONSTRUCTION
The welded chrome-moly steel fuselage cage provides the solid feel of a "real" airplane. For strength and durability in airframe structures, aluminum and steel are superior. The heart of the Mark III Xtra, the fuselage cage, is made from strong, factory welded 4130 chrome-moly steel. We also use 4130 steel in all high stress areas. All Kolb Aircraft utilize traditional control systems, cables and push-pull tubes. Mark III Xtra wings have rigid truss ribs and a massive 6" aircraft aluminum wing spar. Covered with Stits aircraft covering, there is no comparison!

SPORTY HANDLING
The doors/windows are removable which makes for great summer flying.

Although Kolb aircraft are easy to fly and have gentle flight characteristics, they are also high performance aircraft. We recommend training or some transition training before attempting flight in our aircraft.

FOLDING WINGS & TAIL
Like all Kolb aircraft, the Mark III Xtra has folding wings and tail which allow for easy storage or trailering. The tail folds up and the wings fold back along the fuselage in about 15 minutes by one person. No tools or brackets are required Everything stores right on the airframe. Many of our customers fold and unfold their airplanes routinely every time they fly -- year after year. This allows for money saving compact storage at the airport or at home.

Optional toe pedal brakes provide for sure stops and allow a tighter turning radius. The flaps and ailerons and optional brakes allow the Mark III Xtra to be landed, stopped and maneuvered in very tight areas.

GREAT VISIBILITY
Additionally, the modifications made to the fuselage (an added 12" in length) resulted in more cockpit space, more baggage space, and more leg room. The cockpit ergonomics have been modified moving the instrument panel closer to the pilot. The larger windshield area adds even more to the already outstanding visibility offered by Kolb aircraft.

Flaps are standard equipment and decrease the stall speed by 4-5 mph, but more importantly, allow for very steep descents without building up excessive airspeed. This is exactly what is needed to drop into a short field or for an emergency landing.

BENEFICIAL CHARACTERISTICS OF THE MARK III XTRA INCLUDE
STOL performance, roomy cabin, superior visibility, sturdy construction, quick folding wings and tail, superb handling and the ability to carry large people and pay loads. What you get in addition is increased speed, more cabin room, and more visibility. The full enclosure doors are modified to swing forward to facilitate easier entry and exit of the aircraft.