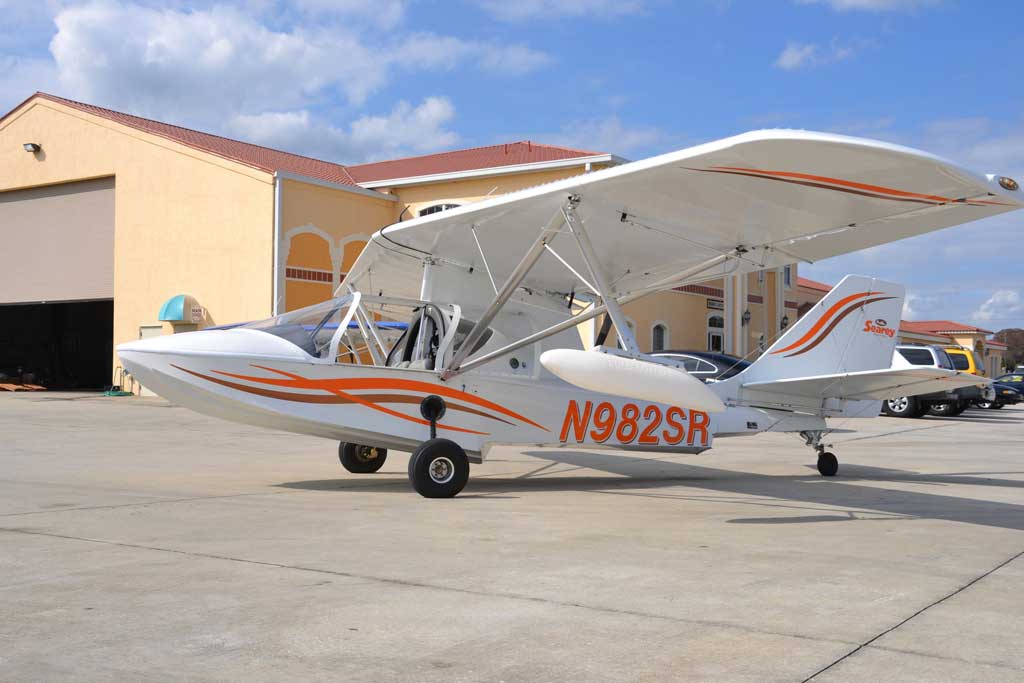 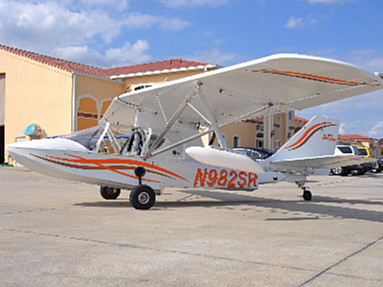 The SeaRey in flight is a beautiful form with its swept wings, sophisticated hull design and panoramic Lexan windscreen and canopy. It is a high wing, pusher, tail dragger configuration. The wings are swept back at the leading edge with a straight trailing edge to form a tapered wing. The engine is mounted on top of the wing, which is supported above the fuselage by a vertical pylon.

The Cabin is designed with side-by-side seating. Entry into the cabin is easy. Slide open the canopy and step over the side into the cockpit. Upon seating yourself, you will find there is plenty of elbow room (44 inches, 112cm), even for the “big guys”. The cockpit is actually the same width as a Cessna 182. The seats are comfortably cushioned, and you will find there is enough space on the instrument panel to accommodate most any instruments you care to install.

There is generous storage space behind the seats to stow your fishing gear, overnight bags and camping gear for those more adventurous trips (L48 x W44 x H17 in.,L122cm x W118cm x H43cm). Additionally, the instrument panel and cockpit can be highly customized to meet your specific needs.

The individual dual sliding canopies provide extra cabin comfort and are an important safety feature for any seaplane involved in water operations. A nice feature of the SeaRey is the ability to fly unaffected with the canopies either opened or closed. In warmer climates the canopies can be opened to enjoy the breeze, and closed in cooler weather to help stay warm. The closed canopies also dampen engine noise inside the cockpit.

Ground Handling is simple and uneventful. The retractable landing gear is rugged and handles even unimproved grass runways with ease. Also the tail wheel steering authority is firm and affords safer handling on takeoffs and landings in crosswinds. The take off roll on land at gross weight is about 375 feet (115m).

Flight begins with liftoff at around 45-50 mph (40 – 45 knots), and the best rate of climb speed is 65-70 mph (55-60 knots). Rate of climb is in the range of 750 feet per minute depending on loading, altitude and temperature. Level out, clean up and throttle back to cruising rpm’s and the SeaRey settles in at a respectable 90 mph (80 knots). Top speed is 113 mph (98 knots). Control pressures are light and responsive. The SeaRey offers stable handling even in gusty wind conditions. Directional stability is very good, with no tendency to hunt due to the large vertical tail surface. Aileron pressure is light and should be led with a small amount of rudder input. With the vortex generators and washout in the wings, the stall is very docile and the aircraft is spin resistant. Upon throttling back and applying 20 degrees of flaps, the aircraft slows to the stall speed of around 40 mph (34 knots). The stall is gentle and straightforward and recovery is conventional. Gently ease the aft stick pressure and the aircraft begins flying almost immediately with little nose down attitude and minimal altitude loss.

Water Operations are where the SeaRey demonstrates its unique abilities. The hull produces a very flat spray pattern preventing water from going through the propeller. You and your passenger will stay dry, even with the canopies open.

Make sure you raise the landing gear for those water operations. The retractable undercarriage comes with a simple manual system or alternatively an electric mechanism. An ingenious over center lock mechanism is a real feature of this delightfully simple design.

With 20 degrees of flaps, you power up for takeoff. The SeaRey will come “on plane” in around 4 seconds. A further 6 to 8 seconds and you are airborne. Accelerate to 45-50 mph (40-45 knots) to rotate and lift off. As soon as you are established in the climb and at a safe height, reduce the flaps to 10 degrees.

Best approach speed for a water landing is 65 – 70 mph (55-60 knots) with 10 degrees of flaps. Upon reaching short final, 20 degrees of flaps can be initiated to further slow the aircraft’s touch down speed on the water. Landing flare begins lower than conventional land-only aircraft. A nice touch down speed is 45-50 mph (40-45 knots). This lands the aircraft “on step” and produces very smooth contact with the water.

The SeaRey is capable of handling quite rough water, however, operating in waves over 12” (30 cm.) is not recommended.

Land Landing begins by assuring the landing gear is down and locked into place. Use the same approach and landing procedure as with the water landing. As tail draggers go, you will find the SeaRey to be very tame and easy to master. Most of our pilots (now over a thousand) have transitioned from tricycle gear configurations with little or no problem.

Watch 1 Video about the Searey 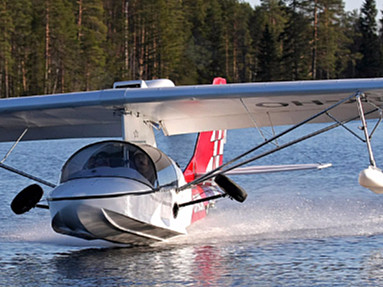