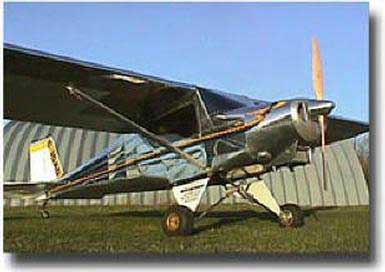 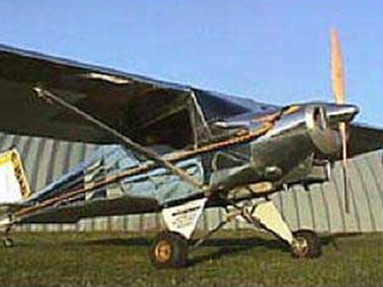 Murphy Maverick A side by side seated, high wing airplane has always had great appeal to a wide variety of flyers. From the every day pilot who likes to fly around his own patch to the outdoorsman or others who want to land in small strips, many pilots prefer the Murphy Maverick for it's performance, visibility and visual appeal.

In many ways the Maverick is a scaled down Rebel... an ultralight aircraft with a big plane feel to it. Certainly it breaks away from the stereotype looks and feel of ultralights that fall into the "flying lawn chair" category. Though it has an empty weight that’s less than half the weight of a Rebel, it still has a solid feel in the air. It’s a breeze in ground handling and offers high levels of pilot and passenger comfort.

Standard wing span on the Maverick is 29’5". However, wing area can be increased by installing an optional wing extension, thus reducing the wing loading. Performance wise, the Maverick gets airborne faster that the Rebel, due to it’s incredible low weight and ample wing area.

You can do it! Building a Maverick is probably a whole lot easier, quicker, and more economical than you think. You do not need any special skills, any materials beyond what you can order for a kit. We’ve even covered all the logical options so you can get it all at once... from one source.

If you have access to the space of a one car garage, and some common hand tools, you can start building. Even with no experience in fabric covering, you will skin the wings and tail surprisingly easily with the help of a household iron and a paint brush. If you’re willing to give it your spare time attention on a steady basis, you’ll be taking to the air in less than a year.

Murphy aircraft have become known for the excellent quality of parts and the Maverick is no exception. In fact about 40 percent of the Maverick parts are interchangeable with a Rebel kit. That includes items like strut fittings, some of the landing gear parts, bulkheads, wing root ribs, main spars, aileron structure, leading edges, leading edge ribs, wing attach fittings, tail wheel....

Ground handling of the Maverick is superb due to good forward visibility, differential hydraulic braking and a kick-out steerable tail wheel (all standard). Advance the throttle and most people are startled to see how quickly the tail comes up and how soon the aircraft levitates off the runway. It takes as little as 100’ with two people on board. Rate of climb, starting at sea level is around 900 fpm with the Rotax 582 engine (climb rate is as high as 1200 fpm with the optional extended wing). There are two powerplant options, ranging from 53 to 65 horsepower. That puts cruise, at 75 percent power, in the 75 - 85 mph range.

Ailerons are responsive in slow flight, right down to an amazing stall speed as low as 28 mph. Flying a tail dragger has never been easier. Most pilots can transition from tricycle to conventional gear with a few hours of dual... something you can do in your own Maverick... before the first 40 hours are flown off.

Fuselage corner wraps for the Maverick are .020" aluminum sheet, same as the Rebel, but the flat surfaces of the fuselage are lightened to .016" as a weight saving feature. The Maverick fuselage is the same width as a Cessna 150: 37".

The Maverick was built to conform to stringent Japanese ultralight criteria. It does that and meets the standards of several other nations as well, including Canada’s Advanced Ultralight Regulations TP101.41. The Maverick has recently been accepted under British Section S regulations. In the United States it can be built in the experimental amateur built category or for use as an ultralight trainer.

However it’s licensed, the Maverick provides unrestricted fun for weekend pilots who want to go out and knock about the countryside. It will do everything a J-3 Cub does, only better. It gets off quicker, flies faster, lands shorter, responds to control inputs more aggressively and has the advantage of side by side seating.

Like the Rebel, the Maverick fuselage is all metal and features semi-monocoque construction for strength and simplicity. It goes together easily. Firewall forward is unique, because of the Rotax 503 installation, which is smaller than the Rebel powerplants. The engine weighs about 99 pounds, almost 200 pounds lighter than a Lycoming O-235, yet there’s plenty of power for fun flying. The Rotax 582 can also be used.

The standard fuel tank is located behind the firewall and holds 6 (U.S.) gallons, with the option of 14 (U.S.) gallon wing tanks for additional range.

The gear is similar to the Rebel gear, utilizing a rugged aluminum V frame with half axles, 600-6 tires and shock or bungee cords that stretch to absorb shock on landing. The Mavericks can be equipped with high profile tires for off-airport landings and is also available with a optional spring steel gear.

What little welding is required for the Maverick is done at the factory. The control stick, rudder and brake pedals are powder coated after welding is completed.

Space in the Maverick cockpit is roughly equivalent to that found in a Cessna 150. There is ample leg, head and shoulder room for two average size adults. Sling seats are comfortable, easy to install and lightweight. Doors are one piece and easily swing up and attach to the bottom of the wing. The instrument panel is large enough for a full compliment of VFR instruments.

Visibility is excellent to the front, sides and through the sky lights. Doors can be removed, weather permitting, to give superb visibility and that open cockpit feeling.

Maverick wings utilize three spars, all aluminum pre-formed ribs, and an aluminum leading edge that forms a "D" cell. The material used is 6061-T6 aluminum. Unlike the Rebel, the Maverick does not require a dozen stringers, since the wings are covered with fabric instead of aluminum sheet aft of the main spar, saving considerable weight and construction time. Ailerons are identical to the Rebels in construction, although, unlike the Rebel they are strictly ailerons, and are controlled by stainless steel cables. The wing tips are fibreglass to the main spar and connected by an aluminum tube to the trailing edge. The wing is braced with a single streamlined strut, attached by dual load path fittings.

The vertical and horizontal members of the tail group are formed using pre-bent aluminum tubing that’s riveted together, covered with fabric, and held in place with flying wires. There is no welding. The elevator is controlled by a stainless steel cable that connects to the control stick and rudder movement is by stainless steel cable that connects to foot pedals with toe brakes. The tail wheel is a full swivel kick out style.

When purchasing an airplane, one of the most important things pilots and builders are concerned with is the structural integrity of the craft. They like to know that they are flying a strong and safe machine they can trust. When comparing aircraft in this regard, the tale is told not only by the design criteria, but by the materials and construction methods.

At Murphy Aircraft Mfg. Ltd., we pride ourselves on providing only the strongest and most structurally sound flying machines possible. Right from the stringent design criteria to the aircraft quality materials and sound fabrication methods, we have designed and built airplanes which surpass anything of similar weight and characteristics.