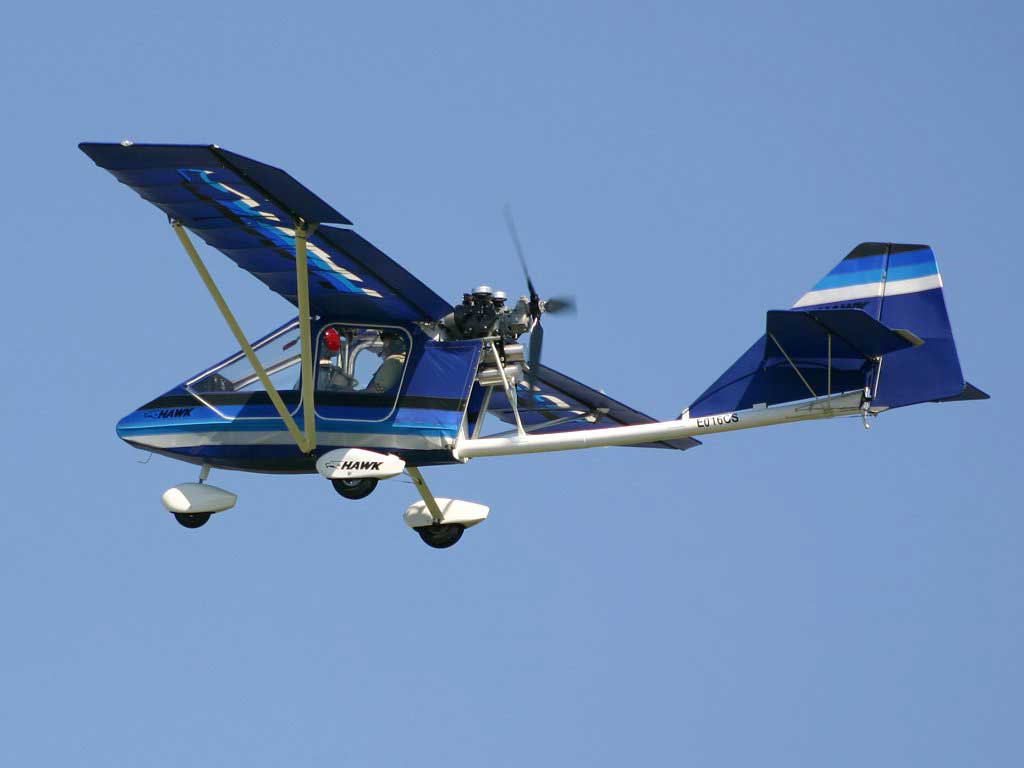 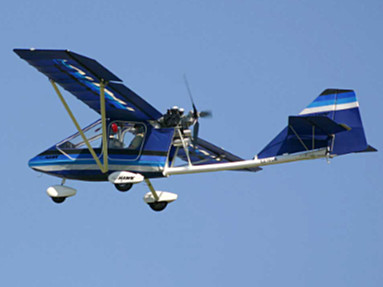 The Hawk Arrow series was originally designed as an updated version of the Hawk Classic, incorporating features requested over a period of years. The nose section is longer, more pointed, and angles downward (steeper) than what you find in the Hawk Classic. This allows for better forward visibility at low sun angles. The nose also has a flatter floor section. Since the nose was made longer, the area of the rudder and vertical stabilizer were increased in order to enjoy the same excellent yaw stability of the Hawk Classic. The tail boom was also reinforced to handle the loads of this larger tail assembly.

The Hawk Arrow Two Seat wing has the same semi symmetrical airfoil as the Hawk Sport, and streamlined extruded aluminum wing struts. Standard features of the Hawk Arrow also include curved overhead and curved windshield. This model is for those who like the more modern jet plane look, yet still want the excellent flying characteristics of the Hawk Classic. Primarily it?s a personal preference, some folks seem to like the smoother rounder lines of the Classic while others like the more modern jet plane look of the Arrow. Either way they all have the same excellent flying characteristics.

The Hawk Arrow Two Seat incorporates tandem seating rather than side by side. This allows a student to feel as if he is flying in a single place during his all important instructional phase because the instructor is out of sight and behind him. When it is time to solo, the student pilot experiences more confidence and less stress with this seating arrangement. He is not suddenly dealing with an empty seat next to him. With tandem seating, turns to the left or right are equally comfortable because you don\'t have to look across a seat to check behind you. In addition, since most ultralight aircraft are pushers, the tandem configuration allows for better inflow to the propeller, and much less drag. Center of gravity changes are also much less pronounced when flying solo vs. with a passenger. In a tandem set up, the front pilot balances the engine, and the passenger sits on the center of gravity, so it makes no difference if you have a passenger or not. The center of gravity changes very little. In a side by side arrangement, however, when the passenger exits the plane, the center of gravity makes a drastic shift to the rear, and must be compensated for in some way.

On the Hawk Arrow Two Seat the rear seat is designed to sit slightly higher than the front seat so the field of vision of the passenger or instructor in the rear seat is not obstructed. Flaps (not flaperons) are standard equipment on all Hawks and are very effective in increasing climb rate and decreasing landing distance. At the heart of the Hawk\'s unique design is its curved boom tube (which has never been successfully copied by any other ultralight manufacturer). The curved boom allows the horizontal stabilizer to be placed up and above the down wash of the wing, especially when flaps are deployed. Another benefit of the curve is shorter landing gear legs making it easier to get in and out of your plane. The curved boom also is stronger in torsion than a straight boom, and allows the airplane to rotate for take offs and landings in a normal fashion without banging the boom on the ground. It is also aesthetically pleasing to look at.