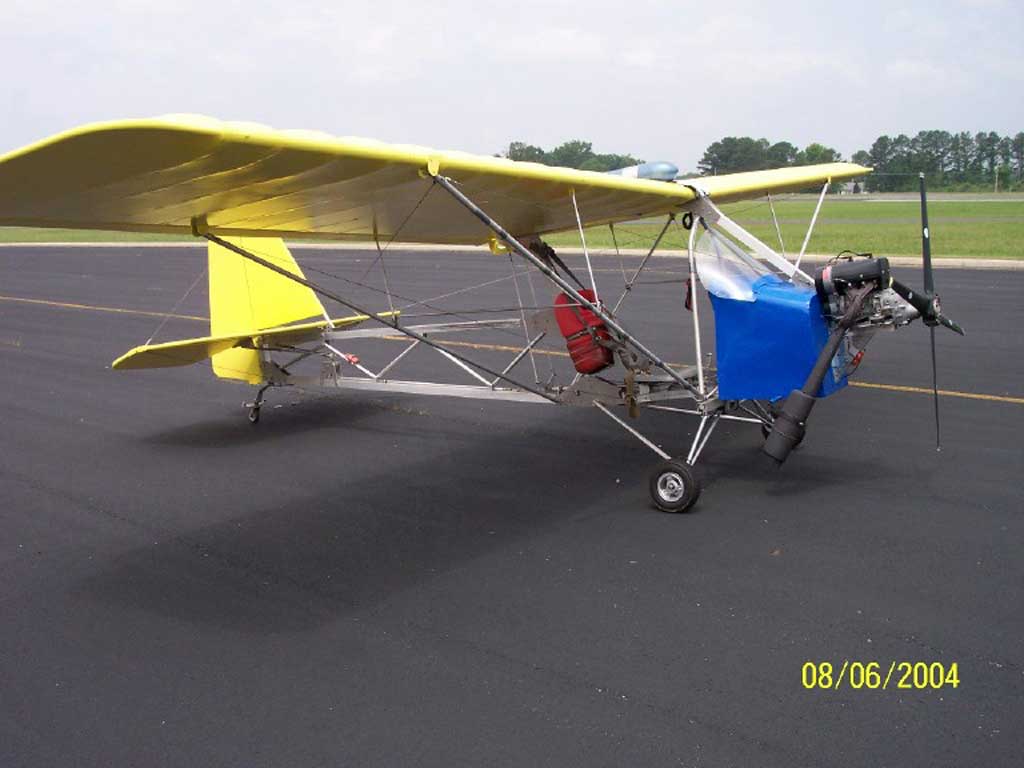 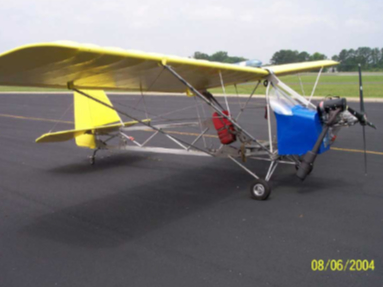 The Affordaplane cost about 3000 USD and is a small single seat ultralight airplane powered by a 35 hp engine.

The Affordaplane was introduced in 2001 as a simple to build, affordable ultralight. Featuring three axes, full span ailerons, and classic lines, the Affordaplane has gathered a lot of attention since its release.

From the manufacturer:
What's the cheapest and easiest ultralight airplane to build from plans? One of the best contenders is the Affordaplane - or 'A-Plane' as this sophisticated, yet ultra-simple ultralight is popularly called. The Affordaplane was introduced in 2001 as a back-to-basics, all aluminum, true three axis airplane that anyone could build, especially those on a tight budget.

The design goals for this unique airplane were nostalgic looks (having incorporated the best elements of classic taildraggers such as the Cubs and Champs), ease of assembly, and performance that rivals more expensive ultralights. Safety was also paramount, and resulted in an airframe that surrounds the pilot through 360 degrees. A thirteen year perfect safety record backs up the claim that this is one safe, tough bird.

The A-Plane's fuselage structure is based on immensely strong two-inch square tubes, similar to many gyroplanes. A technique known as 'match-hole' drilling is used to join the parts. Cut, drill, and bolt, to get a perfect fit. Many builders complete their airframe in a single weekend, an unheard of achievement in airplane construction! At 5' high, the A-Plane is 17'3" long with a 27.5' wing span. The wing features full span ailerons, for perfect control even during strong crosswinds, that would ground other ultralights. Weight is a legal 254 pounds with a gross weight of 540 pounds. This airplane can easily accommodate 6' plus pilots that weigh up to 240 pounds.

Controls are standard three-axis stick and rudder with full span ailerons. The flight envelope was designed to be ultralight legal in accordance with FAR Part 103. Cruise is around 60 mph with a vne of 75 mph. Stall meets the 27 mph or lower minimum. Takeoffs are between 45 to 50 mph and and landing speeds come in around 28 to 30 mph. Climb rates average 1000 feet per minute. Builders praise the flying characteristics of their A-Planes. "Hands off and in perfect trim" are what they usually report. The A-Plane is very stable and able to punch through turbulence like a much heavier plane. The rugged landing gear allows the aircraft to fly in and out of just about any field condition.

Engines recommended in the plans are in the 35 to 45 hp range. One increasingly popular choice is the 1/2 Volkswagen engine. Other motors such as the Kawasaki 440 are also a good choice.

One of the most rewarding features of the Affordaplane is the camaradarie that is shared. You make new friends and become part of a very special family as you exchange ideas and share what you've accomplished. The aircraft always draws a large crowd whenever it is shown at airshows. Perhaps the best part of all is the lifetime bonds of friendship you share between those who build and fly this unique aircraft!

Plans for the Affordaplane are very complete, and have been recently revised and updated. Affordaplane Aircraft was one of the pioneers of 'digital E-Plans', and customers love the savings and ability to instantly have the plans at their fingertips. It is a great way to get started with your own aviation dreams, and currently plans are on sale for only SALE NOW (for a limited time) Only $4.95. The plans also include two classic ultralight construction manuals (over 300 pages!) that are included as a free bonus. The complete package represents the best value available today in homebuilt aircraft plans. So if your dream is to fly in your own airplane, you can get started right now by visiting the plans page at Affordaplane.com!

Watch 17 Videos about the Affordaplane - an affordable aircraft!